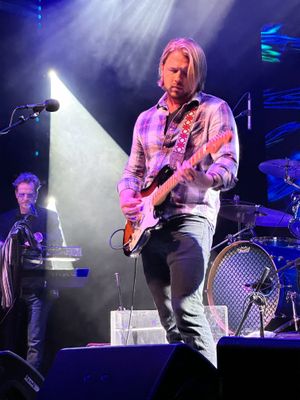 Marty Manous is a rare talent and total package; he is a skillful songwriter, soulful vocalist, and virtuosic guitarist! Creating a sound infused with Rock, Blues, Pop, and guitar hero stylizations (think Jimi Hendrix, Eric Johnson, Stevie Ray Vaughan and Gregg Allman, meet John Mayer and Chris Stapleton), he is an electrifying performer and business savvy artist in tune with today’s music industry. “Marty Manous is one to watch for on the scene. One of the next ‘young lions’ hungry to make his mark on the guitar world.” –Chris Duarte

Currently, Marty performs over 200 plus dates every year. In 2017 he released his second album, “Know My Name,” (Know My Name Press Release) Which made it to number 30 on the U.K. Charts "Know My Name" was well received by critics and fans alike. Receiving reviews in Rock and Reel Magazine and more! Check out the press write ups in the Press and Media section. The Album release show for "Know My Name" sold out Madlife Stage and studio a 300 seat venue in Woodstock Ga. Check out the EPK that was filmed there. After the release of his all original 2015 album on Lucky Street Music Records titled "Transcendence," (Transcendence Press Release) Marty has gained popularity and critical acclaim from the media and fans alike around the world (Press Reviews).  Receiving radio airplay on mainstream stations, collage stations in all 50 states, international airplay in Europe (most notably on the syndicated London show The Blues Hour With Martin Clark), "Transcendence" made it to the top 5 albums on the Independent Album Charts and stayed in the top 10 for 6 months. Marty was voted one of the top three of more than 450 bands for the 2015 Hard Rock Rising Contest in Atlanta, Georgia and performed in the finals to a crowd of predominantly Marty Manous fans at the Velvet Underground with all original music. Capitalizing on the success and momentum of his album, Marty and his management team are expanding tour dates and planning a follow up 2016 album release!

On the album Transcendence, Marty creates a sound that transcends genres and displays his virtuosic guitar abilities. His voice is strong, soulful and adds to the power of this album. Combining the power of Rock and Roll, with Pop sensibilities and Funk grooves "Transcendence" grabs hold of you and takes you for a musical ride that's fun and emotive. Marty calls upon A-list drummer Sean O'Rourke (Sugarland, Derek Trucks, Mothers Finest, Aquarium Rescue Unit) to help add the groove. The songs are well crafted and show a youthful fire, while maintaining maturity beyond his years. Working with producer Sketch Ellis was one of the final pieces to the puzzle for this album allowing Marty to capture the sounds he hears in his head and the powerful performances he produces live to this album.

Growth as an artist is extremely important to Marty, and his love for all types of music helps him achieve this. “Music is the result of the soul trying to express feelings greater than words.” – Marty Manous.  It also helps him meet the fans who are an inspiration and who help make the live experience of Marty Manous a truly extraordinary event. Marty manages to recreate the great concert experiences of the past- that uplifted people and brought joy to their lives- with not only his original music, but also with his ability to channel the emotion and intensity of celebrated guitar heroes.

Marty graduated with Honors from Atlanta Institute of Music. During his time at A.I.M., Marty studied with some amazing musicians/guitarists including Jimmy Herring, Carl Culpepper, Steve Cunningham, and Nite Driscol. Marty studied vocally at Jan Smith Studios in Atlanta, Georgia. Marty Manous - has opened and shared the stage with many top acts such as: Mothers Finest, George Lynch of the Band Dokken, The Fabulous Thunder Birds, Foghat, Todd Smallie of the Derek Trucks Band, Ricochet, The Answer from the U.K., and many other great national acts.